LSU’s Pointer in line for player of the year award–WBRZ By: Michael Cauble

Just hours after showing out in the second half of their game against Ole Miss, LSU guard Khayla Pointer has been named as one of the top players in the country as one of 30 players to the Naismith National Player of the Year Trophy.

Pointer had just three points in the first half of their road game against the Rebels, but showed once again her importance to the Tigers as she finished 16 points and 10 assists and 11 rebounds to post her second triple-double of the season.

Pointer is also on the watchlist for the Dawn Staley Award and the Nancy Lieberman Award as one of the nation&rsquo;s top guards.&nbsp;

More from LSUsports.net on Pointer this season can be seen below:

In her final season at LSU, Pointer is putting together the best season of her career leading the Tigers. She is on pace to set new career marks in points per game, assists per game and rebounds per game. With three more wins, LSU could also win more games than any other season of her career. Pointer recently became the first player in program history to record 1,500 points, 500 rebounds and 500 assists in her career. She currently ranks No. 3 in career assists and No. 7 in career points.

Teaming up with first-year LSU Head Coach Kim Mulkey, Pointer has led LSU to new heights. With seven games remaining in the regular season, LSU will have the opportunity to earn one of the Top-16 seeds in the NCAA Tournament which would allow the Tigers to host first and second rounds games in the PMAC.

After being a preseason All-SEC selection, Pointer opened her season by becoming the third player in program history to record a triple-double in the season opener against Nicholls. She had a double-double the second game of this season and has five total double-doubles this year. 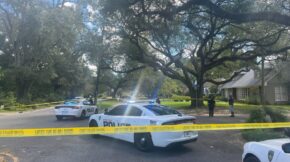 1 injured in Hundred Oaks Avenue shooting Sunday–BRProud.com By: Trinity Velazquez
News
Keeping you connected with all things Baton Rouge since 2020 ©All rights reservd.